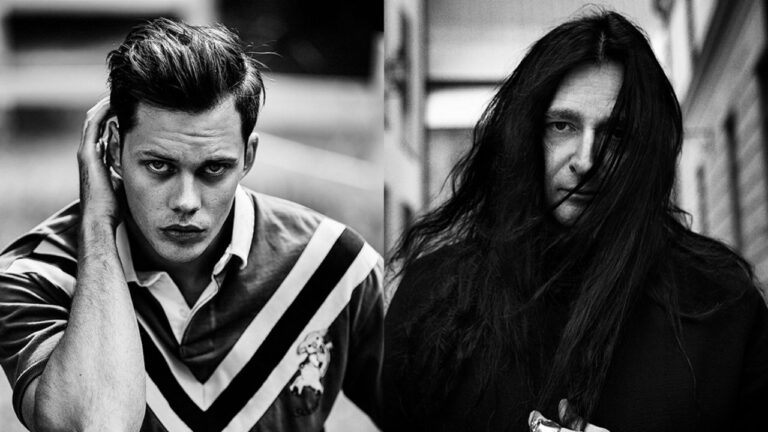 Clark Olofsson from Netflix's crime drama, Clark, is a real person as the show is completely based on a true story. Olofsson is mostly renowned for his involvement in the Norrmalmstorg robbery whose events resulted in the creation of the phrase 'Stockholm syndrome' to describe them. Viewers also wonder about his wife and kids. Well, here is everything we know about Clark Olofsson's real identity, his wife, and his kids.

Clark, directed by Jonas Kerlund, is an addictive Netflix crime drama series that focuses on Clark Olofsson, a petty criminal who rises to become Sweden's most notorious gangster. His good looks and smooth-talking attitude have captivated countless ladies in his life over the years, and he has also persuaded the entire nation to fall in love with him. The show has received high praise for its compelling storyline and nuanced performances by the cast members.

Bill Skarsgard plays Clark Oderth Olofsson, who provides us a glimpse inside the cerebral cortex of one of the most famous human brains of all time. In order to make the story more interesting and enjoyable for the audience, writers and filmmakers frequently fabricate facts. The show was as fascinating as Clark's last name is. Similarly, many viewers wonder if Clark Olofsson was a real person and if everything he did was real. Well, let's find the truth.

Is Clark Olofsson From Netflix’s 'Clark' a Real Person?

Netflix's Clark is based on the autobiography of Clark Olofsson. Clark's narrative is highly complex and unusual, and it is the beginning of what is now known as Stockholm Syndrome, which is why it has become a Netflix-limited miniseries.

Olofsson's life has been a perpetual entanglement with the law, from minor theft of fruits and vegetables to assaulting officers. Olofsson was sentenced to eight years in jail for attempted murder in August 1966. This is where he met Jan-Erik Olsson.

When Jan-Erik Olsson was first released from jail in 1973, he robbed a bank in Stockholm and kidnapped four employees. He demanded and received the release of his good friend Clark Olofsson, and then joined Olofsson and the hostages in the bank. The real partners-in-crime regularly threatened the hostages, yet the hostages liked them despite the fear and sense of life and death during their five days in captivity.

It appears the hostages formed a bond with each other. Clark Olofsson is still acquainted with Kristen Enmark, one of the captives, today. The robbery and hostage situation gained them attention, and the term Stockholm Syndrome was introduced.

Clark Olofsson is a prime illustration of the media's power and influence, particularly when it comes to the idealization and romanticization of criminals. We've seen it before with Ted Bundy: praising a criminal for their other qualities.

As mentioned earlier, the Netflix series is based on the true story of Clark Olofsson. Similarly, Clark Olofsson is also a real person. He was forthright in his attitude and ruthless in his vendettas. The man was emotionally detached. He was in a lot of relationships, but he put himself first. Everything in his life, whether it was his friendships, relationships, or anything else, was determined by his whims and fancies.

Talking about Clark Olofsson's wife, her name is Marijke Demuynck. In 1976, she met Olofsson on a train in a German station when she was 19 years old. He was on the run from the police at the time, having escaped from the Norrköping prison and robbed a bank in Copenhagen.

Marijke's father was the director of Philips, an internationally famous electronics company, therefore Marijke came from an affluent household. The couple married in a small ceremony at the Kumla Prison in Sweden, where Clark was imprisoned for robbing the Handelsbanken in Gothenberg, on August 12, 1976.

Despite his criminal background and the fact that he had two daughters with separate partners prior to marriage, Marijke accepted him. While most of this is accurately depicted in the show, the one exception is that while the couple has two children on-screen, they actually have three sons named David, Donegal, and Dorian in real life.

Clark Olofsson's marriage to Marijke Demuynck ended in 1999, and he later became briefly engaged to Angelique, with whom he has another son. In an interview in April 2018, only a few months before his final release from prison, he revealed that he and Marijke are still in contact and that they talk on the phone frequently.